Yuya Shiina (椎名 ゆや, Shiina Yuya) is one of the main characters in Samurai Deeper Kyo (both anime & manga) she is a bounty hunter interested in the largest bounty she can find, that of 1,000,000 ryo that is on the head of Demon Eyes Kyo.

Yuya is a buxom woman. She has brown hair (blond hair in the manga) which she ties her hair back with a white ribbon and green eyes. She usually wears a kimono with sandels.

Despite being very temperamental and even violent if irritated, Yuya has a gentle and kind personality. Besides Kyo, Benitora (Red Tiger) and Akira have a crush on her. Many other characters come to enjoy her company and regard her as an important friend whom they will protect.

She is interested in the largest bounty she can find, that of 1,000,000 ryo that is on the head of Demon Eyes Kyo but her true purpose is to find "the man with a scar on the back" that killed her brother Nozomu Shiina 4 years before. In the forest of Aokigahara, she learns that Kyoshiro killed her older brother and decides to wait until he returns to the surface in order to get an explanation from him. Yuya is thus interested in Demon Eyes Kyo and Kyoshiro Mibu.

Somewhere deep in her heart, she knows the valuable secret of the Mibu Clan, a secret that her brother Nozomu Shiina shared with her when she was very young. The Former Crimson King also comes to believe that she is a seer, but this is neither confirmed nor disproven. In Chapter 229 (Volume 29) of the manga, while telling her brother that she would not forgive him if he killed Kyo, she admitted out loud in front of everybody that she was in love with Kyo. At the very end of the manga, Yuya is searching for Kyo and in the bonus chapter Kyo and Yuya live together. At the end of the anime, Yuya is shown to make a decision about choosing Kyo or Kyoshiro, but it is not fully explained who she chooses. Weapons Yuya only uses a gun for almost the enitre series, but before Muramasa dies he gives her "a dagger that protects" as Muramasa called it. The dagger protected her in the Mibu village when she came between Kyo and a Mibu soldier.

In the beginning, Yuya had very little interest in Kyo other than turning him in for the massive bounty on his head. Yuya was shocked and frighted upon his first emergence, despite being "saved" by him.

Yuya's initial meeting with Kyoshiro starts with a misunderstanding, as she believes him to be Demon-Eyes Kyo. The misunderstanding is quickly cleared up, though it is quickly revealed that Kyoshiro is wanted for theft and Yuya proceeds to apprehend him. 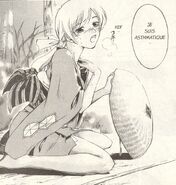 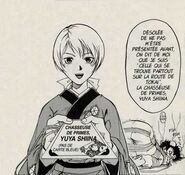 Add a photo to this gallery
Retrieved from "https://samuraideeperkyo.fandom.com/wiki/Yuya_Shiina?oldid=30945"
Community content is available under CC-BY-SA unless otherwise noted.