Start a Wiki
Santera is a former member of the Junishinsho and one of the few surviving members, together with Antera

She has black hair and glasses. She wears a red kimono

She is very closed and shy (because of her power, she could not have a relationship with anyone in her life)

Because of her power, she could not have a relationship with anyone in her life, so Nobunaga adopted her as one of his Jūnishinshō. After she had a fight with Akari, she and Akari became firm friends. She left the Mibu Clan along with Antera because she had someone she could call "friend" in her heart.

Even though she is just a child, Santera has a powerful ability: she emits a powder that melts whoever comes into contact with it.

According to the fanbook: 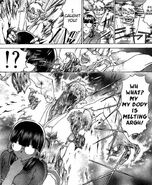 Add a photo to this gallery
Retrieved from "https://samuraideeperkyo.fandom.com/wiki/Santera?oldid=30965"
Community content is available under CC-BY-SA unless otherwise noted.