Shinrei (fell in love with him)

Saisei (actually Tomoe Gozen) is a zombie who fights for Saishi  (Saishi is the only one of the two who is truly a Goyosei).

She has black hair. In the beginning and dress like a nurse.

In her true form, she wore a revealing battle armor and wields the Tomoe emblem and a Naginata. Her hair also grew significantly longer.

She was introduced being loyal and submissive to Saishi, however, Saisei fights to feel alive and for the man she loves, Shinrei.

She secretly fell in love with Shinrei when the latter spoke to her tenderly (something she didn't expect as the others treated her like an object). Since then, Saisei dedicated her life in protecting him.

They first met Demon Eyes Kyo and his group at Jigokumon, in Aokigahara Forest. Here, Saisei used Spiritual Surgery on Yuya to manipulate Shinrei's dragon inside her. So it remains only 12 hours to Yuya before the dragon devours her hearth. Later they encounter Kyo and his group at the second Goyosei's gate and fight against Akira.

Saisei was killed by Akira after he defeated her ability to warp damage to her opponent, but he respected her since she was fighting so hard to protect Shinrei, whom she secretly loved

Saisei uses a naginata to fight.

Saisei's specialty. She can make her hands phase through matter and can perform surgeries on people without touching their skin. She used this ability to manipulate Shinrei's water dragon inside Yuya's body

She can trasform to increase her combat stats

Saisei performed spiritual surgery on herself and transformed her cell structure into a sub-dimension. Every time someone attacks her, she can turn those attacks back on the sender. The downside of the technique that it works even in reverse. If Saisei's opponent stabs himself, they stab Saisei instead. To avoid this, Saisei constantly opens and closes the gate. When she attacks, the gate closes. When she defends, she opens up the gate. Unless someone catches her rhythm, there's no way to abuse this weakness.

Saisei spins her Naginata and generates a spiraling wind with swarms of sharp cherry petals to overwhelm her foe.

Saisei's Naginata is very similar to Whitebeard's Murakumogiri (from One Piece) 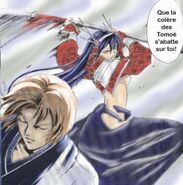 Add a photo to this gallery
Retrieved from "https://samuraideeperkyo.fandom.com/wiki/Saisei?oldid=30942"
Community content is available under CC-BY-SA unless otherwise noted.