Kyoshiro Mibu (Mibu Kyōshirō) is the protagonist of the Samurai Deeper Kyo series, who possesses the soul of Demon Eyes Kyo and powerful ocular prowess. He is the third Red Cross Knight created from the flesh and blood of the Former Crimson King.

He has blue hair and eyes.

He wears a white kimono in the beginning and later violet

He is portrayed as one of the heirs to the former Crimson King of Mibu, Kyoichiro Mibu.

In the beginning of the manga and the anime he is a caring fun-loving young man who wants to help people and continue that way trought the whole story, but if it will be neccessary he is ready to use his sword for protection.

Before the start of the manga, Kyoshiro had lived inside the capital of the Mibu Clan. He was chosen to be the one of the former Aka no Ou's Red Cross Knights when he was just a child.

That was around the time when he was introduced to Sakuya by the current Aka no Ou (Kyosaburo Mibu). At that age, Kyoshiro showed enthusiasm and excitement at being chosen.

He worked hard and help out everyone. As he aged, he was trained in the art of killing. He became the former Former Aka no Ou's assassin, killing at his command.

When Kyoshiro was ordered to kill the current Aka no Ou, Sakuya reappeared in his life. Sakuya tried to stop him from killing the former Aka no Ou, but failed. Finally realizing what he had been doing, Kyoshiro, long with Sakuya, fled from the lands of Mibu.

After they fled Mibu, they met Kyo. Kyo and Kyoshiro had a brief spar. Taking an interest in them, Kyo joined their group. For a while, nothing changed. But their time of peace was short lived, as Chinmei had tracked them down. Kyoshiro once again picked up his sword.

One evening, Kyoshiro meets Chinmei. Chinmei says that same night somebody would have killed Sakuya, so Kyoshiro follows Nozomu Shiina and wounded a child Yuya. Horrified at what he had done, he vowed to never kill again.

When Kyo discovered Sakuya's link to the former Aka no Ou, he tried to kill her. Kyoshiro defended Sakuya and fought Kyo at the battle of Sekigahara.

Kyoshiro defeated Kyo, but could not bring himself to kill Kyo. He solved this problem by sealing away Kyo's spirit and hiding his body.

Mibu Kyoshiro was now a medicine man. He met Yuya while he was traveling to Edo by himself. Kyoshiro appears to not know any sword skills at all, but is it really the truth? He believes one should cure people, not kill them. He loses control to Kyo for the first time when he was attacked by the Bantouji brothers. The second time, he lost control when Jimon attacked him. The third time he lost control, Kyo managed to hold onto the control of Kyoshiro's body.

As Kyo and Nobunaga battled, Kyoshiro knew that Kyo would lose, so he surprised Kyo and took over, regaining full control of his body once again.

While Kyo fought evenly with Nobunaga, Kyoshiro defeated Nobunaga easily. But as Kyoshiro was about to finish him off, Kyo managed to wrestle control away from Kyoshiro. He did not appear in the manga until after Kyo's third fight with Oda Nobunaga.

When he finally did resurface, it was in the body of Kyo. He had managed to transfer his spirit into Kyo's body while Kyo fought Nobunaga for the third time. Leaving Kyo in his old (Kyoshiro's) body, Kyoshiro went before the former Aka no Ou, and became the next Aka no Ou, although the former Aka no Ou still commanded him.

After Kyo fought his way to the former Aka no Ou's red tower, Kyoshiro stepped in and challenged Kyo. During the fight, Kyoshiro fatally wounded Kyo twice, but Kyo got up from both, using his will power alone to continue the fight. Kyo eventually defeated Kyoshiro with the Kouryu, the ultimate attack of the Mumyo Jinpu Ryuu. Both battle worn, they charged at each other for a final attack. Right before their swords met, Kyoshiro swapped bodies with Kyo and allowed Kyo to land a fatal blow on him. It was revealed, that Kyoshiro had joined the Former Aka no Ou to reclaim Kyo's body, and to help him get stronger. After knowing this, Kyo used his own blood to heal Kyoshiro's wounds.

They teamed up and attacked the former Aka no Ou. Their teamwork was short lived however, when Kyo's hunger for battle took over him, transforming him into a battle crazed beast that lived only to kill. Though Kyo managed to defeat the former Aka no Ou, he turned on his friends. Kyoshiro and the others held Kyo off until he regained his senses and gained the powers of the Crimson King's Cross. Their victory was short-lived, as the former Aka no Ou was still alive.

Kyosaburo, along with Chinmei, helped Kyoshiro regain his body, allowing him to distract the former Aka no Ou while Kyo landed the last attack. Kyoshiro survived the battle and ended up living with Sakuya.

The origin of Kyoshiro Mibu remains a mystery throughout a good portion of the anime, but he and Kyo appear to share the same body. Kyoshiro and Kyo have completely separate personalities and fight for control during the first couple episodes until Kyo emerges fully.

Kyoshiro is equal (if not better) with Kyo, until near the end of manga (until Kyo regained his true body). He is the strongest Mibu (after Muramasa's death), just below the Former Crimson King and Kyo in his true body.

Kyoshiro, like Kyo, knew the Mumyo Jinpuu Ryu sword technique (he has learned this technique  to protect Sakuya). He was able to master every technique except for the Kouryuu, the ultimate attack (because he never reached/released in battle his full potential or "the Power of Faith", see Demon Eyes Kyo Techniques)

As Fubuki, Kyoshiro is an expert in Soul Transfer (He transfered Demon Eyes Kyo soul in his body and Nobunaga soul in Lord Torii, Benitora uncle).

Kyoshiro Mibu's Sword Style is called Sword of Yin: limits, and negates any kind of event that has happened to its target. It is an ability that returns the target to its former state </span>no matter what has happened to it. In other words, the Yin Sword returns an attack to its basic state causing the energy to bleed off back into the atmosphere.

Kyoshiro used to own Shibien, until it turned black from killing too much, and was later used by Sasuke Sarutobi

These are the basic techniques.

Launches a deadly wind at the enemy. The wind continues slicing away at the victim until nothing visible of their body remains. The attack's nature negates the efforts of the victim to regenerate or heal themselves.

The user creates visual illusions, even turning illusions back on foes who had originally cast them. Also, the illusions of Shin are capable of mildly damaging attacks to harass the enemy.

These are the advanced techniques in the Mumyou Jinpu Ryu. The techniques are based on the Shishin, and each has its uniqueway of dealing damage to enemies.

A very powerful attack with incredible speed. Kyoshiro shoots a flaming phoenix that slices, rams, and pulverizes the target with great force. He can even ride along within the Suzaku to initiate the attack up close and personal if he so chooses. If the foe is much weaker, then this attack can even deprive them of their regeneration. If the Suzaku is defeated by the enemy then it revives itself from destruction to attack once more.

The exceptions to this resurrection occurring are if the Kyoshiro is too weakened to form the Suzaku correctly at its full power or if the strength difference between the Suzaku and the opponent's rejoindering attack are simply too great.

Kyoshiro shoots a white tiger at the foe. If the strike of the tiger's first claw misses, then the opponent is dragged in by the second claw and ripped apart by the beast's fangs. Like Suzaku, the attack can be used from a distance or the user can travel inline with Byakko to carry out the attack up close and personal.

A black tortoise entwined with serpents made of wind. It functions simultaneously as an offensive and defensive move. The user surrounds themselves in a dome/sphere (the tortoise's shell) to block an incoming attack. Meanwhile, the serpents can then bind and destroy the enemy.

More than a dozen Mizuchi are projected toward an opponent and surround him, eventually merging to create an immobilizing and destructive whirlwind that pulls the opponent into the heavens where the waiting Kyoshiro (in the form of the legendary blue dragon) descends to deliver a powerful blow.

Kinju seems to a type of magic that seal objects, living beings, energy, along with a wide variety of other things within another object. This is what Mibu Kyoshiro used to seal Onime no Kyo body

Kyoshiro can transfer a soul (including his own) from one body to another. He transfered Demon Eyes Kyo soul in his body and Nobunaga soul in Lord Torii, Benitora uncle

Kyoshiro can call out to the Mibu blood within him for significant boost in power, which changes his eyes to crimson red. With Red Eyes activated, he emits a strong Killing Intent / Aura (normally, unlike Kyo, Kyoshiro has not Killing Aura)

Kyoshiro can use the True Red Eyes for a limited amount of time as he is a Red Cross Knight. They increase his power and killing aura tremendously. 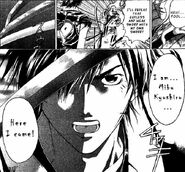 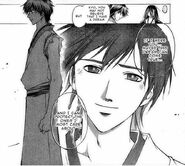 Add a photo to this gallery
Retrieved from "https://samuraideeperkyo.fandom.com/wiki/Kyoshiro_Mibu?oldid=30605"
Community content is available under CC-BY-SA unless otherwise noted.