With her beauty and voluptuous body, Okuni is a femme fatale. Her outfit consisted of an off-shoulder white and violet Kimono, revealing her bare shoulders, neck and upper chest.

She has an ahoge and long flowing blue hair (before Akira cut it). Underneath her left eye, she has a tear mole.

She is very buxom and wears red lipstick.

She adores Demon Eyes Kyo obsessively, to the point that to be hated by him would make her happy. That said, she joined the Junishinsho as Indara II, but she does not hesitate to sacrifice herself for Kyo.

She joined Junishinshoas Indara II, but she does not hesitate to sacrifice herself for Kyo. She then joins Kyo's team and assists Kyo in finding his real body. She knows many things about Kyoshiro, and Sakuya, but she does not speak about them, merely hints at them. When the group separated she went to Kyoto. She met Akira in Kyoto and offers him her own life in exchange for Kyo's real body; however, Akira doesn't kill her, instead sending Okuni to infiltrate the Mibu land to find information. Akira promises he will guard Kyo during that time. In the Mibu arc she appeared shortly when she successfully infiltrated Mibu land. She was caught by Taihaku and engaged him in a short battle. She was not victorious as, at a point in the battle, Taihaku told her to stop fighting. Taihaku then allowed her to escape. She then rejoins with the group, her body wounded, stating that Kyo's body is Taishirou's hand. When the group split into four she advanced with Sasuke to fight against the Jūnishinshō. She witnessed Sasuke fight his old friend, Makora (Kotaro), and the real Indara. After Makora brutal death by Indara, she cried and said that Makora once said to her that the creatures that Mibu Clan creates are like fireworks: even though they live a short life they fight hard as long as they can so that they can shine brightly. After the fight she once again left Sasuke to continue gathering information.

She had relatively minor role in Mibu arc. In the final battle she, as Yukimura asked her, led the large group of reinforcements, consisting of Tokugawa, Date and the Sanada army. Anri, Ieyasu Tokugawa Nobuyuki Sanada also came to help.

In the bonus chapter it is shown that Yuya has a love potion, given to her by Okuni, that Bontenmaru trying to steal.

She is the best informer in Japan

His power resembles One Piece's Ito Ito no Mi (Doflamingo) 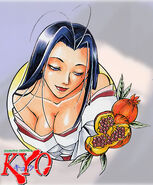 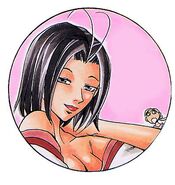 Add a photo to this gallery
Retrieved from "https://samuraideeperkyo.fandom.com/wiki/Izumo_no_Okuni?oldid=30917"
Community content is available under CC-BY-SA unless otherwise noted.